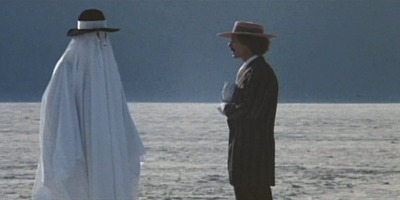 The story of Christ transposed to the American West.... where Christ wears a purple zoot suit and brings back to life the same man about a dozen times. Absurdism isn't quite the right word. Hysterical, it is. In one scene, two men try and ride away on a horse but continually fall off. I'm not sure if this was intended commentary on the trajectory of our expectations on the genre or just something that happened and director Downey decided to use it since the entire crew and cast were probably stoned The whole film is like that.... not quite a parody but wallowing in the excesses of hippie filmmaking to create something altogether unique. And the film stops down for not one but two extended song and dance sequences that only furthers its individualistic attitude about subverting things. I'm not as warm to Downey's other works, but "Greaser's Palace" is marvelous. 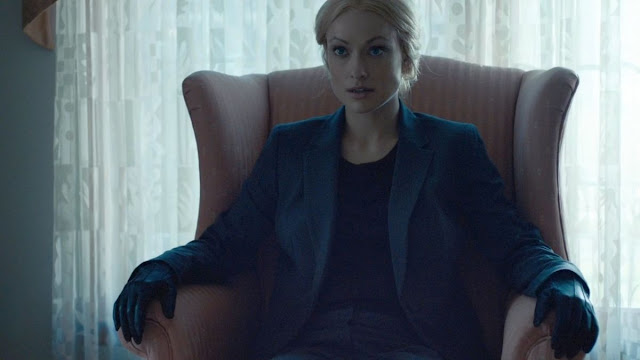 What drew me to Sarah Daggar-Nickson's film, "A Vigilante", was the star headliner Olivia Wilde. But what emanates from this film long after its over is the ferocious attention to sorrow and the unique/challenging ways that specific emotion can branch out into the world and provide relief for others. And I don't use the word "ferocious" lightly here. As an abused woman whose taken her harrowing ordeal to great heights, Wilde becomes a helper to other women who can't escape their own toxic plight. This sort of rationalization of violence has been the stalwart narrative device for lots of previous films (mostly male driven), but in "A Vigilante", Daggar-Nickson taps into a special force that Wilde embodies with passionate dedication and steely resolve. This is a film that will make you wince.... nervous.... angry..... everything Wilde experiences, the film mirrors in intensity. It's jagged timeline of events doesn't make anything easier. "A Vigilante" is a film with an unassuming title, but one that deserves its place in the catalog of lean, driven revenge films but asks that you don't necessarily cheer for its protagonist, but get just as angry with her about the culture of abusive violence. The least we can do is recognize the anger behind its action-film facade and do our best to listen and help those living this fiction for real. 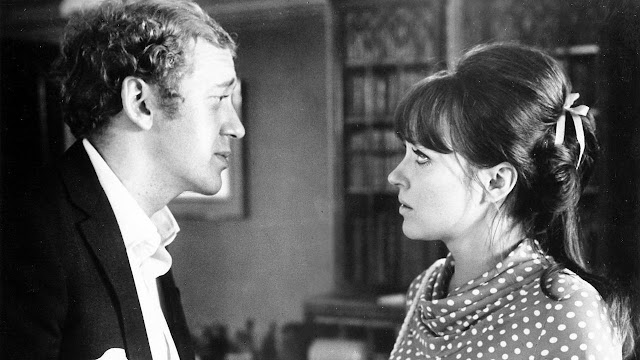 Like his best film "The Loved Ones" (and one of the truly great films to earn the moniker of black comedy), director Tony Richardson's adaptation of Nabokov's "Laughter In the Dark" is uneasily funny and consistently unnerving, especially in its final third after free-spirit Anna Karina has successfully and insidiously evaporated the posh lifestyle and marriage of an art dealer (Nicol Williamson). She's not fully to blame, since Williamson laser-sets his attention on Karina upon first sight....like a similar sexual compulsion that spins the eerie attraction within Nabokov's most recognizable work "Lolita". "Laughter In the Dark" is so good because it can be read as an attack on many things: the end of the 60's as free love and flower power turned dark and the hippies settled into the burgeoning halls of power and innovation around the world.... as sexual compulsion literally blinding someone.... and as a potent exploration of man and woman's shifting, destructive power over each other. This film deserves a proper release (seen here through a copy obviously spliced together from an old worn VHS tape). Anna Karina has never been better as sensual exploiter with a strong head for absurd manipulation. 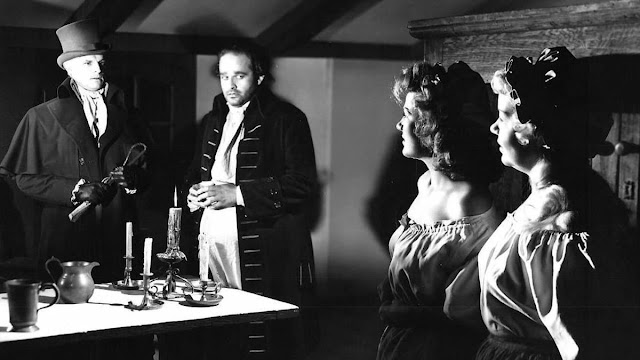 Though taking place within the Robespierrian subterfuge of late 18th century France, Anthony Mann's "Reigh of Terror" walks, talks and looks like a 40's American noir. With barely a frame of sunlight to brighten the elusive motivations of its various double and triple agents- all searching for a little black book of names that could derail or save France's future- the film is heavy in both mood and tempo. It's also a white-knuckle ride of close calls and searching deception. One of Mann's best films produced directly after "Border Patrol" and among a string of original noir films that feel effortless. 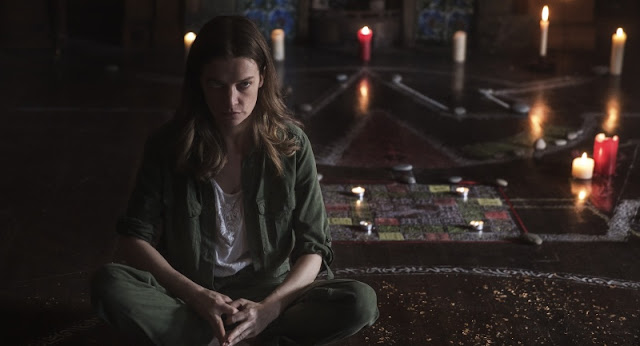 Every now and then, a horror film comes along that understands the true value of slow burn. Liam Gavin's "A Dark Song" is one such effort. Like Rob Zombie's adrenalized "House of 1,000 Corpses", Gavin's film won me over in the final third when all the wicca magick and supernatural elements that provided a faint dusting of atmosphere in the first half give way to a mind-boggling climax of horror and outrageousness in its second half. In it's own twisted way, this is a film that has more to say about faith and the invisible lines between heaven and hell than most of those Christian produced I Believe films. 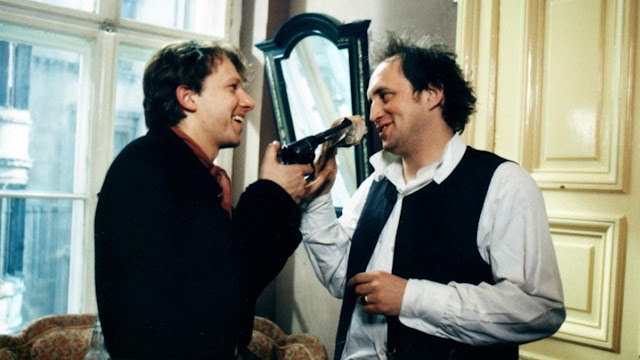 Agnieszka Holland's "Army of Shadows" and a bold early masterwork from a filmmaker whose had her definite highs and lows. Focusing on a roundelay of characters and never settling one just one, the film follows each revolutionary socialist in their relationship to the possession or harboring of a bomb intended to assassinate the czar. Just as doom-laden as Melville's earlier Resistance drama, "Fever" is an apt title, representing either the fervor each character feels for his/her revolutionary temperament and ideals or the sweaty impulse it imbues in the viewer as a series of double crosses, internal expulsions and coincidental incidents continually stifle their violent purpose. Hard to find, but well worth the search. 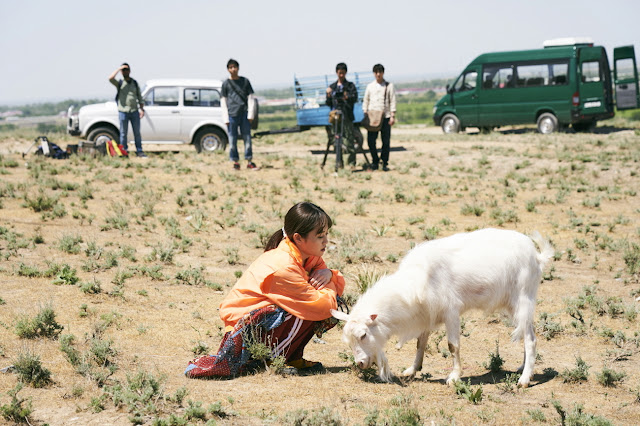 Kiyoshi Kurosawa swerves in yet another endearing direction with "To the End of the Earth". Essentially a travelogue film about a young TV show host named Yoko (pairing again with K-pop star Atsuko Maeda) and her camera crew slugging around Uzbekistan searching for human interest stories and locales, Kurosawa slyly opens up a nuanced portrait of culture clash and homesickness. Initially a cipher for the direction of her cameraman and producer instructing her what to do and say, Maeda's Yoko gradually becomes the silent beating heart of the film as she wanders around, gets into trouble for filming a restricted area and faces heartbreaking challenges from back home. And it's revealed that she, really, only wants to be a singer in life. But for all the film's stasis during it's first two thirds (with the exception of a freed goat and its ultimate repercussions), "To the Ends of the Earth" subtly shatters your heart in its final thirty minutes as Yoko breaks free from the constricted nature of her role and does something for herself. And the final moments are overwhelmingly sweet and hopeful in a film that, up until that point, made the case that leering eyes at outsiders and the inability to clearly communicate are terrifying ways to live day by day. Kurosawa has crafted a magnificent film that not only completely pivots from his other work, but reveals the master still hasn't lost a step no matter what direction he chooses to go. (edit: it appears this film has received a very quiet year end release in 2020.) 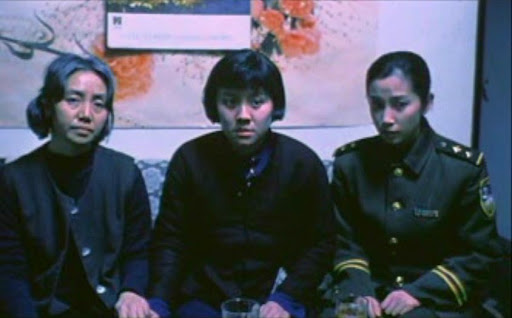 Released in 1999- during the explosive and now legendary year of new Hollywood classics produced by expressive individualistic talents- Zhang Yuan's "Seventeen Years" deserves its overdue status as a masterpiece in the midst of this towering cinematic year. Essentially an observational travelogue film about a recently furloughed prisoner and the prison guard who unselfishly escorts her to her holiday destination, it eventually becomes an overpowering examination of regret and forgiveness. I dare anyone to watch the final few minutes and not get emotionally floored in the way Yuan stages a reunion scene where eyes, guarded body language and the gentle unspoken curl of lips says more about the inner workings of this family's trenchant relationship than any screenplay could ever deliver. 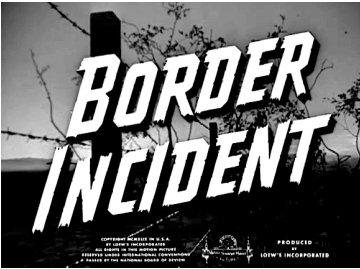 Made right before his run of film noirs would be over and he'd embark on a series of westerns throughout the 50's, Mann's "Border Incident" feels especially dark, full of heroic compromise and real-world nihilism that cancel each other out. It's also quite the prescient film. If not for a somewhat tacked-on voice over that closes the film with a hint of optimism, "Border Incident" could be released today and we'd all nod and agree that the problem is as divisive and violent as ever. The story, which delves into the illegal smuggling of Mexican labor forces across the US border, is half a cop story (as undercover agent Ricardo Montalban tries to infiltrate the criminal organization) and half brutal social commentary. This is the type of film in which a man is crushed by a tractor and it doesn't even blink an eye. With this film and "Reign of Terror", at number 7 on this list, filmmaker Mann reached his epoch of beautiful fatalism. 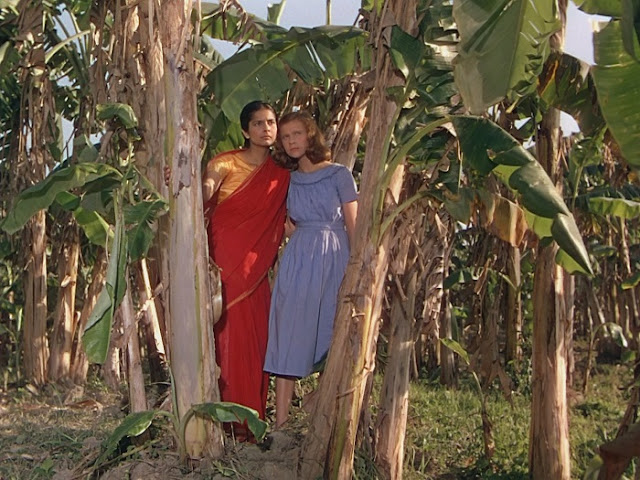 Made smack in the middle of Renoir's second life in cinema, rooted in Hollywood after fleeing Europe during World War II, I'm repentant it's taken me this long to see this film (as if the case with so many late career Renoirs). Washing over one like a golden memory, "The River" introduces itself like an easy memorization  of languid colonialism, and soon transforms itself into an interior examination of what it means to actually remember those metamorphic moments that make us the people we are today.
Often praised for its Technicolor sharpness (and no doubt it looks incredible), but the real hook of the film is it's gentle spirit of the intimate. Focusing mainly on three young women- teenage daughter Harriet (Patricia Walters), friend Valerie (Adrienne Corri) and adopted Indian daughter Melanie (Radha)- the family lives in a sprightly existence. Prone to poetry and introspection, Harriet serves as the film's narrator, trying her best to objectify the subjectivity that happens along the way. And what happens along the way is the appearance of Captain John (Thomas Breen), a wounded war veteran who comes to live with the family, setting off fireworks between all three females on the property.
But far from a glib tale of unrequited love or possession, "The River" (based on a novel by Rumer Godden) is much too smart for such a thing. Each woman steadies a distinct relationship with Capt. John and the film carefully measures out the mood of each. With Valerie, the relationship is seductive and adult. With Melanie, it's tenuous since they both come from staggeringly different backgrounds. Their relationship feels like the one that would overtake the rest of a much more slight effort. And with Harriet, "The River" finds its true footing, which is an examination of a young woman trying to make sense of both her flowering adulthood and the cruel world around her. None of the three relationships drown the other out, and each compliments the film as something attuned to the gentle rhythms of growing up.

Just found your site ~ you are adorable and loaded with information. Thank You for the smiles and learning. ebay bellen