In the last decade or so, the Holocaust drama has given way to a subsection of films exploitatively known as the Holocaust-revenge drama. Rooted in fact and applying a thriller apparatus in hopes of assuaging the complicated moral feelings of guilt, anger and stubborn reconciliation that typically breathes within any conversation about the Holocaust, anyone wanting a more procedural and humane history of this should read Simon Wiesenthal's book "Justice Not Vengeance". The latest incarnation of the Nazi hunt lies in Atom Egoyan's "Remember".Weisenthal himself is name-dropped several times here, but Egoyan and writer Benjamin August shoot for a more primal idea of revenge.

That revenge comes in the form of elderly Zev Guttman (Christopher Plummer), housed in a nursing home and dealing with the recent loss of his wife. To complicate matters, Zev suffers from bouts of Alzheimer disease, which forces him to carry a letter from fellow home patient Max (Martin Landau) that clearly delineates his mission of tracking down one Rudy Kurlander. No doubt is cast on the assignment given Zev. In fact, his first step along the journey (after walking out of the nursing home) is to buy a firearm. Tasked with four addresses around the country- including one stop in Canada- we observe as Zev ambles in and out of the lives of four various men where past atrocities are either justified or ignored, depending on whether its the right Rudy Kurlander or not. 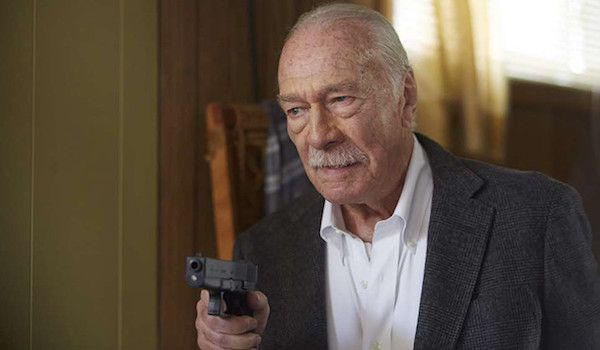 Known for once helming complicated and multi-layered dramas that often exist in the morbid reaches of human loss or obsession, Egoyan seems to have lost his way recently. While "Remember" isn't as muddled as "Where the Truth Lies" or as ordinary as "Chloe", it still remains a fairly straight-forward and uninspired thriller. It does, however, work best in the way it deals with the effects of revenge and memory on others, especially in the innocent and confused eyes of children endlessly sheltered at the edges of the film and forced to interact or deal with the violence of adults.

Less interesting are the clunky mechanics of Plummer's travels to and from said adversarial showdowns. "Remember" skirts the edges of believability in how easily one slow, old man can smuggle a gun in and out of the country, ramble freely from numerous hospitals and old age homes and defy authorities when he uses his his driver's license and credit cards. Even more misguided is the inclusion of a final act twist that, while certainly at home in something akin to a Brian DePalma film, cheapens the impact of "Remember" and its justification of violence begetting violence. See, there's those complicated feelings of guilt, anger and stubborn reconciliation I mentioned earlier. Perhaps the best way to make any type of Holocaust film is the way Claude Lanzmann did with "Shoah". I'd much rather watch that heartbreaking seven hours of historical confrontation again rather than the 90 minutes of Egoyan's elderly-Mr-Majestyk.


Remember is currently in limited release around the country and expanding wider in the coming weeks.