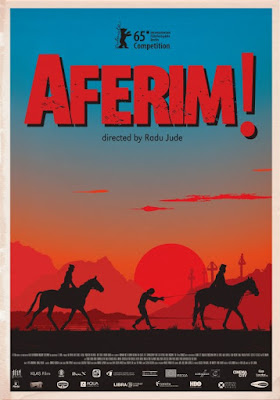 Those Romanians are insidious in the way they twist and bend genre to their own disciplines. Cristian Mungiu's "Beyond the Hills" is a terrific psychological thriller hidden beneath the surface of almost documentary-like religious piety. Corneliu Porumboiu's "Police, Adjective" is a police procedural wrapped up in farce. And Cristi Puiu's "The Death of Mr. Lazarescu" is just plain horror.

So it's no surprise when Radu Jude's new film, "Aferim!" takes as its central conceit the adages of the American western- finding a local constable and his son tracking down a runaway gypsy accused of slighting his master- before segueing into black comedy so dark that even the town square's puppet show spews violence and misogyny as the male puppet relentlessly beats the female one. There's not even respite to be found in the local church when, during one if its many non-sequitur like scenes, a traveling priest arbitrarily denounces the Jewish race. So goes the rugged outback and populated cesspool in "Aferim!" whose dirt and sweat and spit are as palpable as the new crown king of filth shown in last year's "Hard To Be A God"

Thrown into the hunt mid-way as the film opens, we follow Costandin (Teodor Corban) and his teenage son Ionita (Mihai Comanoiu) as they banter across the landscape in what we're shown to be the year 1835. Ionita plays with his sword, lashing it like a stick rather than revealing any acumen or skill. Costandin seems to enjoy his constant barrage of put-downs and storytelling, feeling like an old man just happy to be talking to someone rather than himself. They meet various people and, slowly, we learn their assignment is to find runaway gypsy Carfin (Toma Cuzin) wanted by his master for crimes against the manor. These one-scene characters don't advance the narrative as much as they sprinkle the "Aferim!" with moments of atmosphere, energy and cultural resonance, adding to the mordant and flippant nature of the film.

Against their best intentions, Costandin and his son do find Carfin, and their journey back with the bounty in leg shackles is just as adventurous as their way to him in the first place.

Filmed in often static shots which have become the norm for the Romanian New Wave, "Aferim!" differentiates itself from the pack by being a truly funny experience in all the wrong ways. There's obviously nothing inherently side splitting in the selling of a young boy (which Costandin does to the young cohort found in the company of his bounty) or the drunken ill performance with a local prostitute, but it's these stone faced moments of early 19th century normalcy that infuse "Aferim!" as a film desperately trying to call attention to the absurdity of the whole thing. And yet, despite its black comedy heart, Jude knows when to flip the switch and allow the cruelty of human nature to take over. There's a moment of 'frontier justice' so harsh and unrelenting, we're immediately shaken back into the realization that for all the unrefined murmurs of conversation and petty prejudices, "Aferim!" is no comedy after all. It's a serious exploration of a time when diplomacy and personal freedoms are nonexistent in a brutal caste system. Looking at it that way, maybe the film isn't that far removed from the John Ford westerns after all.


Aferim! is currently playing in limited release in New York and Los Angeles, expanding wider in the coming weeks.