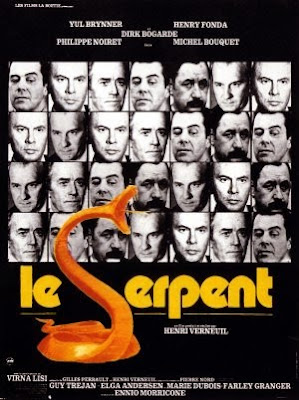 French filmmaker Henri Verneuil hit his stride in the late 60's and early 70's with a trilogy of films including "The Sicilian Clan" (1969), "The Burglars" (1971) and "Le Serpent" (1973)..... highly entertaining (and star studded) "policiers" that have yet to find their due in widespread distribution here in the States. The Austin Film Society recently included "The Burglars" in a repertory screening under the auspicious title of "The French Connection", but that's the extent of Verneuil's impact on American screens. Even though I love the frenetic pace of "The Burglars"- in which Omar Shariff and Jean Paul Belmondo engage in one of the finest car chase sequences ever put to film- Verneuil's "Le Serpent" is the better film of the bunch.... a cerebral, coolly detached spy tale that spends much more time on the diagnostics of a lie detector test than the various dead bodies that wash up along European shores. Like John Huston's "The Kremlin Letter"- which also trades in skulduggery without a hint of pretension- "Le Serpent" details the carousel of double crosses, political innuendo, 'spyspeak' and Cold War fixations with an icy gaze. It's only fitting that, in the finale, when head spook Henry Fonda makes a swap with the Russians to bring back a downed Air Force pilot, not only does the film's biggest enemy get off easily, but its prefaced with a line of dialogue where Fonda says the intel of the American officer in "explaining just how the Russians were able to shoot him down at 30,000 feet" becomes more important than anything we've observed over the past two twisting, convoluted hours. I can only imagine this nonchalance is apt par for the course in the world of high stakes spy games.

Beginning with the defection of KGB agent Yul Brenner, his information to the Americans (and namely Fonda) sets in motion the devious wheels of "Le Serpent". His intel- that there are highly placed spies in all echelons of governments around the world- kick starts a series of murders, wearisome eyes and urgent secret memos in both France and America. Philippe Noiret is one such agent cast under suspicion. British officer Dirk Bogarde, seemingly with his fingers in every cookie jar, plays both sides. Fonda is unsure of Brenner's real intentions. And all the while, bodies of agents turn up dead, others go missing and seemingly innocent photographs belie sinister intentions. All of this is handled in Verneuil's no-nonsense approach, refusing to telegraph anyone's actual motive and creating a paranoid atmosphere where anyone could be "le serpent" working their magic to eradicate the others.
I can't see "Le Serpent" existing in any other time period than the 70's. Echoing the later American thrillers of Sydney Pollack and especially Alan J. Pakula, "Le Serpent" is an arid exploration of the callowness involved in world politics. The basic sentiment of wanting our world to be safe, but not knowing just exactly how we make it so safe, continually runs through the veins of this film. It's a thriller, yes, but also a pretty frightening document of plausible denialability.
Posted by Joe Baker