Where does one begin with "Jupiter Ascending", the latest sci-fi romp from those once trendsetting Wachowski siblings? Perhaps the best point of entry is Mila Kunis holding a big gun with steely intent. Or perhaps the other is the oddball collection of Oscar contenders, actors who've spent a career embellishing those weary second-fiddle characters, and a host of extras caked in makeup and latex to create a universe of elephant people, SIM robots and hybrid dog-men. Either way, its a safe to declare "Jupiter Ascending" a loud, vibrant and presumably expensive failure. 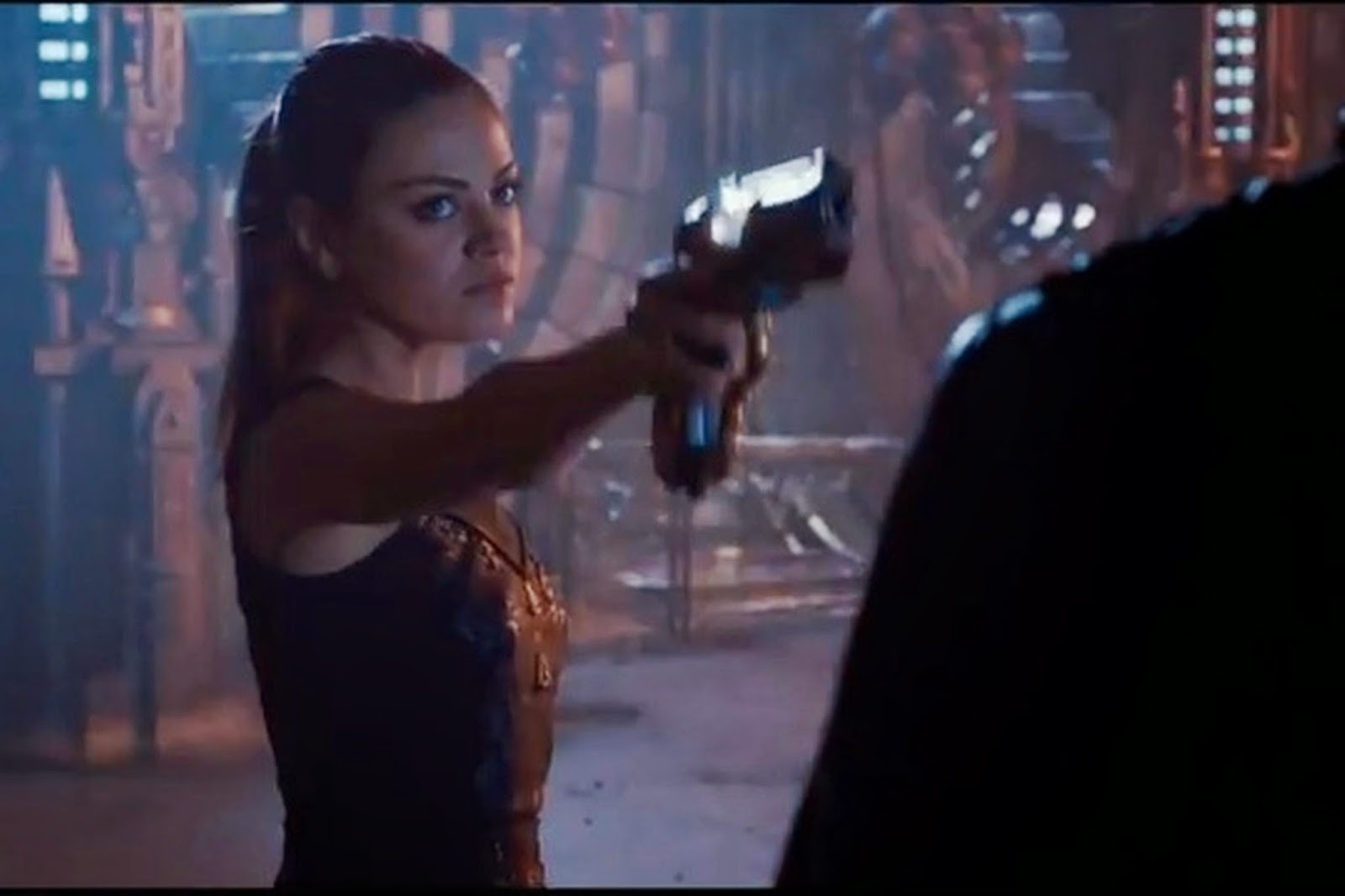 Seemingly regurgitating the "chosen one" scenario of their groundbreaking "Matrix" film series, this time the honor is bestowed upon a female, creating a grrl power invention in the form of Mila Kunis. Sucked up into the warring factions of the big wide universe, it turns out earthling Jupiter (Kunis) is the reincarnation of some long dead queen whose family hold various inheritance claims on the planet. Like most royal families of magnanimous wealth, the siblings are squabbling over their parcels, including Titus (Douglas Booth) and older brother Balem played by Eddie Redmayne in full-on goth mode, complete with snakeskin black suits and a wispy, almost constipated manner of speaking. With all the forces of the universe trying to kidnap Jupiter and usurp her (unknown) planetary gain, hybrid ex-cop Cain (Channing Tatum) is the only presence fighting for her safety. Tons of fireball shoot outs, whiz-bam floating cinematography and needless destruction of both downtown Chicago and a netherworld city take precedence over real character development. After all, this is a loopy, CGI inflated spectacle filled to the brim with the Wachowski's penchant for leaden dialogue and undercooked supporting players serving as either tone-deaf humor (think Jupiter's Russian family) or cardboard narrative progression (Sean Bean and his sickly daughter).

Shuttled from its original fall 2014 release to a more reserved spot like the first of February never bodes well for any type of film, yet "Jupiter Ascending" feels especially disappointing considering the aptitude of its filmmakers. Though "Cloud Atlas" was largely maligned, I found it to be a hugely moving, adventurous idea of spatial identity and cross universal human connectivity. Sure, it contained its moments of fumbled exposition, but it worked. "Jupiter Ascending", on the other hand, feels less creative, borrowing so many of its themes from other science fiction epics as well as their own work.

In fact, the only time it really springs to life is in its gaudy myth making, such as the wink-wink nods to age old whispers such as the extinction of the dinosaurs, alien abduction and even crop circles. It's in these moments that, like "The Matrix", the film pulses with strong ideas borne from the make-believe tales of our youth.... and wide eyed conspiracy theorists, a sub section of the crazy underworld given a throw-away genuflection within "Jupiter Ascending" in relation to a question about why no one will remember the destruction of downtown Chicago. But, just when one thinks the film will burrow deep into these curious myths and ghost stories to create a compelling neo-fairy tale, "Jupiter Ascending" steps back into a soulless action set-piece where green screens take control and the people we're supposed to be rooting for become animated projections within those screens. Imagination? Sadly, that seems to be the one aspect not required of a 100 million dollar plus action film these days.
Posted by Joe Baker