The cinema landscape is full of recovering addict stories- some are languid and woozy (no pun intended) while others focus on the post recovery stages of admittance and penance. In Joachem Trier's "Oslo, August 31", we meet Anders (Anders Danielsen Lie) in a depressed state. One of the opening images shows him filling his jacket pockets with rocks and feebly attempting to drown himself. He, and the film, are clearly not in either aforementioned stage of recovery. Anders returns to his rehab house and prepares himself for a day of leave in which he has a job interview set up. From there, the camera dutifully embeds on his shoulders as he visits old friends and haunts, leaves regretful phone messages to an ex-girlfriend and nervously tries to avoid slipping back into his habitual routines. 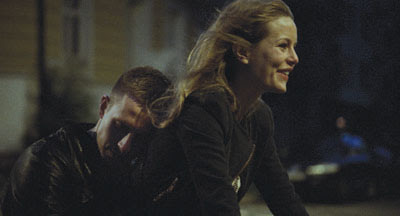 Joachem Trier's sophomore film is spectacular for the way in which it takes an ordinary subject and weaves a devastating tale. It's also a very personal film. It's not long into the film that Trier adds voice overs of unnamed people recalling the various pleasurable memories of growing up in Oslo, Norway. It feels like an old fashioned novel as memories marry against the image of a bustling but quaint cityscape. And into this city ventures Anders. We desperately pull for Anders to come out unscathed from his inner demons. He's not a bad person.... he's just incredibly confused and damaged. He first meets up with an old friend, now happily married and domesticated with children. They take a walk and the friend senses some inner turmoil in Anders. Anders refuses a beer and we cheer a little. Next, he shows up to his job interview, but self destructs when the managing editor begins to inquire about the few missing years in his portfolio. It's at this point that "Oslo, August 31" turns a bit darker in its voyage with Anders. He shows up a party and makes a move on an old girlfriend. She rebukes him and the heavy drinking starts. He leaves with another old friend to go bar hopping. Here, he connects with a beautiful college student and they all end up, at dawn, skinny dipping in a pool. Anders sits on the edge of the pool, the young girl urging him to come in, that "Oslo, August 31" reaches a fever-pitch of psychological tension. I was basically screaming at the image, imploring Anders to jump into the pool with the girl (Ingrid Olava) and detour his highwire act of sobriety versus addiction. But, writer-director Trier has other elements in mind. Like the melancholy voice overs earlier in the film, happiness is such a fleeting gesture.