Originally released in 1969, Jean Pierre Melville's "Army of Shadows" really didn't come into acclaim until 2006 when Rialto pictures re-distributed it, crafting an arthouse success out of a sort-of long lost classic. Made in between Melville's string of hard nosed, French revisionist black and white noirs, perhaps "Army of Shadows" was doomed to a quiet existence because it didn't fit squarely into the great director's expected cinema lineage. Regardless of the reasons, Rialto's diligence and foresight in re-positioning "Army of Shadows" as the one Melville you had to see is a minor stroke of genius. It is a masterpiece, in every way.

Adapted from the memoirs of French Resistance fighter Joseph Kessel, "Army of Shadows" is a patient, brooding examination of the interior workings of one French Resistance cell. Based on actual people, I'm tempted to call "Army of Shadows" the best film about the Resistance, even though it comes relatively late in this spirited genre of films. Where a majority of the Resistance films deal with a certain person or action against the deadly German war machine, "Army of Shadows" shows us both the anxious and the mundane with events as diverse as the smuggling of a transmitter through a heavily guarded train station and a night time escort onto a submarine. The results- a free France- are the same, yet Melville gives both events the same heightened tension even though the submarine landing yields far less devastating consequences as the only threat present is an old French policeman, both related to the person running the Resistance mission and stating he's the only customs officer watching the entire beach for the Germans. Shifting through a series of near misses, captures, imprisonments, escapes, and cafe conversations, "Army of Shadows" reveals an entire universe of Resistance fighters and the fragile line between freedom and torture with pristine vision. Lino Ventura, as the "star" in the film in the loosest sense, plays Philippe Verbier, a man running the cell with clarity of purpose... stone faced and confident even when mounted against the fate of death by firing squad. Though so many Ventura films are unavailable on DVD and this praise is probably limited, but I think this is his best performance. 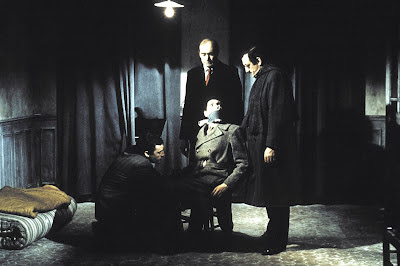 Also present in "Army of Shadows" (and most Resistance films) is the parlor of doom. Granted, Melville drapes a majority of his films in this, yet the tone is set from the opening scene as German soldiers march towards the camera next to the Arch de Triomph and central characters are picked up, tortured and executed with little warning. The film's central colors- drab blacks, deep browns and winter-time gray skies- also denote the seemingly insurmountable task the French Resistance fighters have against the German Army. But it's the procedural nature of the film and Melville's insistence on transferring a quiet thriller over the historical context that makes "Army of Shadows" such a breathless exercise. In the face of defeat, what shines through most deeply in Melville's film is determined resolve of human nature to fight for what belongs to us. Whether that's a smuggled transistor radio to hear BBC broadcasts or arranging for the violent escape of a fellow prisoner, "Army of Shadows" gives hefty weight and reverent reflection to both.


"Army of Shadows" is the first film in a series of posts looking at films that deal with the Resistance during World War 2.
Posted by Joe Baker