William Friedkin's "Killer Joe" is an aggressive white-trash film noir that consistently shifts its point of view between its characters, creating a bizarre and almost over-the-top narrative that accelerates as its progresses to its shattering finale. And did I mention it's brutally funny... as well as just brutal? 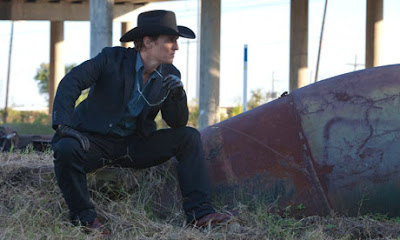 Starring Matthew McConaughy as the titular cop turned contract killer, he's brought into the illicit scheme of a dumber-than-dirt Dallas family to murder and collect the insurance money of another family member. The father and son duo of Emile Hirsch and Thomas Haden Church fail to realize the full implications of their plan, especially after Joe falls in love with their damaged, vulnerable sister/daughter Juno Temple. Snaking its way through the noir machinations, "Killer Joe" is a dirty, grimy experience that feels like a B-movie from the mid-90's Oliver Stone... and I mean all of this in the most positive way. I was riveted, unable to take my eyes off the screen as McConaughey owns every scene and plot the reversals fly from out of nowhere. "Killer Joe" also takes as its milieu the downtrodden, dilapidated wasteland of West Dallas. Nary a skyscraper or downtown skyline is in view, instead placing the characters among the Trinity river outflow boundary.... a cesspool of abandoned train tracks, broken down pool halls and graffiti rimmed highway underpasses. It's probably one of the most striking films I've ever seen filmed in Dallas without actually revealing any charm or technology of the city.

Adapted from a play by Tracey Letts, this is the second collaboration between he Friedkin, the first being the equally tough "Bug" in 2006. Both films frame their collective genres- psychological horror and film noir- within a strictly interior mode. "Killer Joe" features a wham-bam editing style, whose cuts and reaction shots are incisive and almost hurtful. "Killer Joe" is much closer in style to Freidkin's "The Exorcist" than anything else he's done. Secondly, the sound design is amazing, crafting barking dog noises, helicopters whirling overhead and engines revving into an overwhelming canvas of buzz. All of this frames "Killer Joe" as a technically unnerving effort. But perhaps the most interior moments of all reside in the outstanding finale, where tense conversation and psychological warfare meet over a dinner table full of fried chicken and almost unbearable silence. I doubt this was the type of endorsement KFC was looking for.
Posted by Joe Baker

I was ready to shrug off this film but after reading this post, I think I am going to check this out.

Thanks for the comments, Teresa. It is a hard film to watch at times, but one that's not misogyny for the sake of misogyny.

Cannot wait for this personally. big turn around by Matthew Mahogany and he's finally picked up some decent scripts.