With a title like “Cocksucker Blues”, its hard to imagine anyone lobbying for a mainstream release. Robert Frank’s travelogue documentary alongside the Rolling Stones and their 1972 American tour, “Cocksucker Blues” is part late 60’s Stan Brakhage-like experimentation and part backstage confessional. There are copious amounts of drugs used and naked women flailing about- everything we expect from a world class rock and roll band on tour! Leveraged by lawsuits for years but highly obtainable nowadays (complete with art museum showings), Frank’s infamous documentary is messy, unfocused and lacks any real compelling images. Choosing to intersperse concert footage with the band’s downtime, “Cocksucker Blues” is most interesting for its subdued moments when the Stones look and sound like ordinary guys… playing pool in a southern pool hall, being bored out of their wits on a long drive and critiquing their sound in a quaint hotel room circle. 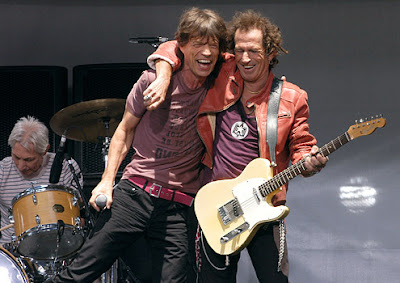 Brett Morgen‘s “Crossfire Hurricane”, while being the complete opposite of “Cocksucker Blues” in both mass distribution (premium cable) and purpose (somewhat educational timelines), is a mark above some of the other Stones docs floating around out there. Predominately assembled from concert footage and excerpts from other films (like “Cocksucker Blues” itself), “Crossfire Hurricane” is fetching for the way in which it jettisons ordinary non-fiction storytelling and jumps right into the fray. One doesn’t have to be a Rolling Stones junkie to follow the tale, but it certainly helps to know that one guitar player dies and another abruptly leaves at the height of their late 60’s stardom. By eschewing the traditional stories of how the band got started and beginning smack dab at the crest of their impending worldwide fervor, “Crossfire Hurricane” could be called a mood piece more than a documentary. From there, the film burrows through the years with concert footage and melancholy voice-overs from the band members themselves, tracking time and accomplishments with varied reels of film, allowing us to discern time and place through clothing, style and the Stones own recordings. “Crossfire Hurricane” is nothing if not expertly edited as well, delivering a wry sense of humor through newspaper clippings, backstage footage and the images of the hazy late 60’s and early 70’s. And when things are forced to get heavy, the film delivers on that as well. For a complete examination of the tragedy at Altamont, I’d highly recommend “Gimme Shelter”…. a Stones film that is essential viewing and neither “Cocksucker Blues” nor “Crossfire Hurricane” can easily compete with. Honestly, there’s not a documentary out there of any type that can compete with it. Yet, “Crossfire Hurricane” does its part in evaluating the incident within the Rolling Stones pantheon and elicits modern day reminiscences from Richards and Jagger in a level eyed manner. The whole mood of the film shifts and Morgen examines how this one event changed not only the tenor of the band itself, but of the prevailing sickness of the hippie movement. Even though “Crossfire Hurricane” is a safe venture for HBO and most likely intended for the novice, it should still be a welcome surprise to anyone who feels “Some Girls” is the last great Stones album.
Posted by Joe Baker